The visual quality of a digital photo is usually damaged when it is upscaled. Moreover, when you add certain things for your convenience into that particular upscaled picture, things become uglier and the picture as a whole become unattractive. That is because upscaling makes the picture pixelate causing the overall look of the picture to blurry.

Companies like Adobe, on the other hand, have been working on algorithms for years to attempt to bring a particular function of picture zooming and into their image-editing software without losing its attractiveness. The most recent update of Photoshop has provided just the same for its user enabling a new feature to all termed as ‘Super Resolution’.

Using the feature in Adobe Photoshop

The new tool is called Super Resolution, and it should be available right now provided you have a current Creative Cloud membership of Adobe that includes all the Adobe software including Photoshop. Open a photo in the Adobe Camera Raw interface to find it.

If you open a raw shot from a digital camera in Photoshop, it should open in ACR without any additional steps since it is the default functionality of the software. If you’re attempting to open a different type of file, say JPEG or PNG then you will have to use Adobe Bridge to open the file on the camera raw interface. 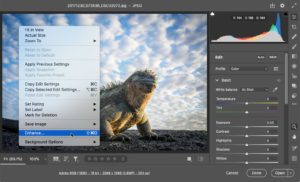 Assuming that you are in the ACR now, right-click on the image and select “enhance,” or use the ctrl + shift + D keyboard shortcut. A dialogue window with a zoomed-in glimpse of your image will appear. The preview will appear in the picture box when it has been rendered. If you click and hold on to the image, it will revert to its pre-enhanced condition, allowing you to view a direct comparison between the two pictures. In this way, you can differentiate between the two and how much change has been done by Photoshop.

If you select to commit the modifications, this popup window will also tell you about the estimated time it will take to convert the picture. Because this is a computationally complex process involving many algorithms, it may take some time. Thus, if you’re using an older or outdated machine, you may have to face longer periods or delayed results. After you click “enhance,” the image will be converted, and a preview will appear at the bottom of the screen, exactly next to the original picture.

Adobe’s AI engine, Sensei, is used to parse the data needed to improve your images. The feature seeks to quadruple the number of pixels in the image by doubling both horizontal and vertical lines of resolution. 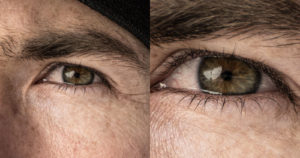 When you zoom out on the photographs, you can see a change, especially in places with a lot of detail. These areas are known as high-frequency areas. The whole image looks to be crisper in general. These enhancements are most likely due to a function called Raw Details, which is found in the same dialogue box as Super Resolution.

Why using Super-Resolution in the future?

This function of Photoshop can come in handy particularly for those people who have their old gadgets with them. Many people cannot afford to have new gadgets since they are too costly and are out of budget. Here, Photoshop will come to your aid. It can enhance the normal photos from your old camera by almost doubling the amount of resolution. In this way, the megapixels in your image will be increased to a greater level providing you with greater quality and crisper picture. All in all, this feature launched by Photoshop will be the one to look for in the future.