What is the future of tablets? Are they going to skyrocket or to die? Let’s have a look.

With the introduction of the first tablet “Linus Write Top” in 1987, these handheld devices that combine the features of both smartphones and laptops have been on the hit list. While a tablet incorporates the traits of both the devices, they work like neither in the same way. Tablet computers or tablets are a flat electronic device that has a touch screen, are rechargeable and can store different files. The tablets, however, do not use the same hardware system as conventional desktops and laptops.

A tablet does not require a keyboard or mouse to function. Instead, the touch screen is operated via a finger or a stylus.

In fact, the idea of developing tablet computers began with the concept of pen-computing. Pen computing is any computer user interface that utilizes a stylus or pen as input devices. 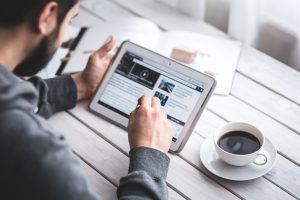 Why Tablets Are Preferred Over Desktops and Laptops

Unlike desktops and laptops, flat touch screen electronic devices are easily portable. Hence, they are preferred both for work and fun. The device integrates all the essential features of a laptop at a really affordable price. Thus, they are a viable option for everyone from college students to office goers.

Tablets are equally good for downloading apps and large files and playing video games at home. The screen has excellent resolution and it comes with ample storage space.

The history of tablets dates back to 1888. Back then, they had tel autographs – electrical devices where the input and output data were presented on a flat display.

However, the evolution of the tablets as we know today, started with the “Linus Write Top” in 1987. Although it was manufactured and shipped in large quantities, it was not a huge success. The exorbitant prices, $2795, didn’t gain much appreciation from the public.

Next came the Personal Digital Assistant or PDA or the Apple Newton in 1993. This was Apple’s first venture into the field of tablets.

It was in 2000 that the term “Tablet PC” came into existence, with Microsoft’s entry into portable computing. In five years, Microsoft developed a version of the tablet that could easily operate Microsoft XP.

In 2010, Apple brought the historical iPad, which was the start of the cut-throat competition between different companies. Samsung, Microsoft, everyone designed their own versions with more exciting and exquisite features.

2015 was a throwback for the world of tablets when all the big names like Microsoft, Apple, and Google brought back the keyboard attachment to the tablets. However, with it came other exciting features like cloud storage, wireless charging, etc.

The tablet that is the most talked about these days is Microsoft’s Surface Pro 4 that has almost all the features of a laptop along with a memory capacity of up to 16giga of RAM and i7 core processor.

How the Future of Tablets Looks

In today’s digitally driven world, a new idea is born every second and technology is slowly taking over to execute even bigger things. In such times, any device or technology needs to improvise itself to sustain.

However, if experts are to be believed, tablets have a long life and bring in new features every year. So how does the future of tablets look? What all can we expect from these sleek models of technology?

There are a few concepts in the market that are getting ready to change the course of tablets in the technology field. Some of them are:

Literally, a transparent mirror to the world, this ultra-thin tablet by Japan’s Mac Funamizu is about to enter our lives. This tablet has a glass window through which you can look at the world, select an object and get every information about it with a touch.

Samsung might soon bring into existence flexible tablets. You can flex or roll the screen any way you wish – a rollable tablet if you will. This would further help by increasing its portability.

Apple might soon release as a future tablet the transparent iPad. This can be pretty stylish with an almost entire see-through glass. Plus, it will be easy and light to carry.

These are just a handful of the many more new ideas that are about to enter our lives and transform the original telautograph concept which started the era of tablets. The future of tablets is bright!

How Technology And Fashion Come Together

May 11, 2020 admin Culture, Entertainment, General, Tech Comments Off on How Technology And Fashion Come Together

How technology and fashion come together Zac Posen succeeded in coming up with a cognitive dress that changes color based on your activity upon social media; Chanel has a history of working with 3D printers […]

May 18, 2021 admin Tech Comments Off on Amazon latest tabs – A wonder for kids & adults

It’s quick to get swept up in the hype around a new high-end tablet, such as Apple’s newly updated iPad Pro range. However, for the vast majority of individuals, such machines are impractical. Recently,  Amazon […]

Which Apple watch suits you best?

May 28, 2021 admin Entertainment, Tech Comments Off on Which Apple watch suits you best?

Which Apple watch suits you best? Apple makes the most popular smartwatch in the world. The design and working of the watch are second to none, which makes Apple the leading contender in smartwatches.  According […]