Recently, the United States Air Force is enlisting robot dogs to guard its Installation of the Future, a futuristic airbase. This base is kept highly secret and is still under the research and development phase. Tyndall Air Force Base revealed last week that it will be patrolled by robots also called the four-legged robotic dogs. The initiative is part of the Florida facility’s ambitious vision for defense which will be solely based on technology. The airbase is located just outside of Panama City.

The robot is known as a four-legged automatic Ground Vehicle, in military terms. Its fundamental model is known as Vision 60 and is part of a larger family of robotics that is classified by function and scale. The Vision is the version for government and business, but Ghost, the manufacturer, still renders a Spirit model for universities and science. Wraith, a potential model in the works, will be used in further military applications. Thus, these are a couple of models of four-legged robots which are under research and development phases.

The design of the Vision 60 model highly resembles that of a robotic dog. You might be wondering that why the US air force has gone for the four-legged theory when they were using robots resembling the shape of a tank without any legs? One possible answer is the agility of these new robots.

With four legs, they can move quickly and can easily handle the steep slopes, unlike their tank-like counterparts. The legs of the Vision 60 drive it at a maximum speed of around 4.5 mph, which is marginally higher than a person’s normal walking speed. 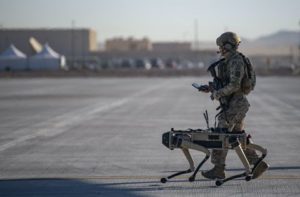 The robotic dogs can greatly improve situational perception for defenders as a mobile sensor hub. They can patrol the base’s isolated places while defenders continue to patrol and track the installation’s other sensitive areas.

The Vision 60 robots are semi-independent, which means they have sensors that enable them to traverse routes on their own while still accepting human orders. The Vision 60 normally uses lidar to feel the world around it using lasers for its own versatility. It can also infer resistance from the electrical motors in its legs, allowing it to navigate in the terrain it can’t see when walking.

Extensive research is being done on these prototypes to enhance their abilities to a greater level. In the near future, the United States air force plans to use these robots with the help of Virtual Reality headset marking a new era in military tech.

These devices have an HD video source, thermal imaging, and perhaps infrared as well, to assist humans. The robot-recorded video can be transmitted to an android tablet run by a human overseer, who can then see what the robot is looking at, as long as there is a data link established.

The Vision 60 can even crouch and crawl when crouched, much like the dogs it imitates. This will help the robot blend in with tall grass or hide undercover, as well as maneuver through tighter spaces. This will help in crucial military situations as well since they are hard to detect.

Thus, apart from all the qualities of these four-legged robotic dogs, they are still under development to enhance their capabilities to a greater level. Right now, their function is only limited to the base defense but research is being done to launch them into a battlefield as well. The major source of attraction of these machines is their ability to move fast without being quickly detected making them lethal for their foes.