In this pandemic era, you have probably seen your coworkers with the help of video chats. Also, your subordinates and team members are used to seeing you with a handsfree chord or with small wireless AirDots protruding from your ears. The use of gadgets like these has increased exponentially since the inception of the COVID-19 crisis. Thus, Razer, a computer accessory company, has now released a pair of wired glasses with built-in headphones that are intended for use at home.

The $199 Anzu Smart Glasses are available in square and round frame forms. Different sizes are also available depending upon your face. Every arm of the glasses has a 16mm audio driver inside that funnels sound toward your ear without isolating you from your environment, regardless of the size you select.

That isn’t suitable for flawless sound clarity, but it will do in an office setting in the near future or for people who work from home. The term Smart in the name of the glasses is often misleading.  There’s no display in the glasses, so if you’re expecting ones like the one on Google Glass or other virtual reality glasses, you’ll be disappointed. 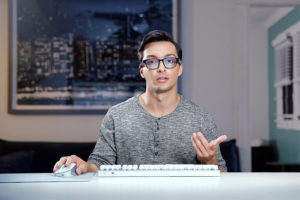 The glasses use Bluetooth 5.1 to connect to an Android or iOS device, with Razer’s own patented low-latency technology to avoid disruptive lag or asynchronous video calls. Each arm of the glass has its own built-in battery that lasts for five hours before needing to be recharged. After charging, they will automatically connect to the previous device they were connected to if the Bluetooth is switched on.

The Anzu glasses can do all the audio duties you’d expect a standard pair of Bluetooth headphones to do thanks to a built-in, multi-directional microphone that picks up the wearer’s voice. Users will change speed, pick up calls, skip songs, and invoke the phone’s built-in smart assistant using touch controls on the side of their bodies.

The company claims that the lenses block 99 percent of Ultra Violet light as well as 35 percent of blue light. While research is still divided about whether or not reducing blue light can help with problems like eye strain, reducing the amount of blue spectrum that reaches your eyes at night can help you with persistent sleeping issues.

Although Razer specifically intends for the Anzu to be used for work from home, the glasses are also IPX4 water-resistant, so wearing them while working out isn’t out of the question. Thus, taking into the equation of office usage when things get back to normal. They’re just 1.7 ounces, and as a marketing strategy, Razer sells replacement sunglass lenses for under 30 bucks. 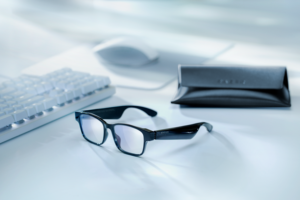 The Razer Anzu costs $199 at Best Buy and $199 on the Razer website. These aren’t the costliest frames on the market, but they do come with extras like built-in headphones, omnidirectional microphones, and touch controls. Additionally, when buying the Razer Anzu, Razer has collaborated with Lensabl to provide customers with a 15% discount on personalized prescription lenses.

When it comes to music, the Razer Anzu has decent audio, but when it comes to calls, it seems to be lacking. Voice calls are clear, and people on the other hand can affirm that, but listening in public can be difficult due to background noise. It may also be disconcerting as the level quickly rises and then drops.

Although Razer has stated that this device is primarily made for people to assist them when working from home but we will see its use more than that in the years to come. Especially in places which are comparatively quiet such as office sittings, these glasses can come in handy and make your meeting comfortable and relaxing.