Let’s say you’re working on a critical project on your computer or texting with pals on your smartphone when the app unexpectedly fails. You restart the software, only for it to shut down again. This starts to happen very frequently, messing up your entire working or leisure routine.  When an app begins to behave in this manner, it is pretty unpleasant.

Whether you’re using Android, iOS, Windows, or macOS, fixing crashing applications isn’t rocket science. We’ll guide you through the necessary actions you need to do to get things back on track in this article. However, double-check that your problems aren’t caused by a single app. If several apps are acting strangely, you may be dealing with a broader issue with your computer or smartphone.

Corrupted data is frequently to blame when a mobile app malfunctions. Many apps save data in your phone’s local storage as a cache. You’ll be able to access the app more rapidly the next time you start the application due to this. However, the locally saved data might become faulty, causing the program to fail. Thus, forcing the app to refresh its data from the cloud or the program’s original files, you may occasionally repair the problem.

Clear an app from your phone’s recent memory to do a simple cache refresh on Android. Recently used applications are kept active on your smartphone, which keeps their local caches intact. You may clear the cached data by deleting the program from memory. To do so, start by sliding up from the bottom of your screen to access the app list. Then, by swiping up on the glitchy app, exit it. It is a good practice to restart after wiping corrupt cache so that no problem arises later on.

Moreover, you can do a more detailed cache reset by going to the settings and selecting your application. There, you will have the option of clearing the cache. Also, see if your firmware is up to date for enhancing the security of your phone. Updated phones are less prone to crashes.

For iOS and iPadOS, the procedure is reasonably identical to that for Android: clear the data cache, restart the phone, update the software, and finally contact the developer for assistance if the issue still persists. To begin, erase the app’s cache by deleting it from memory: Slide up from the bottom of the screen and hold until all of your open applications display, then swipe up on the app that’s giving you trouble. 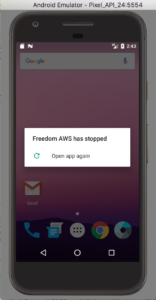 Unlike Android, there is no simple method to remove an app’s cache or data on an iPhone or iPad. As a result, the first thing you should do is check for updates. Open the App Store and touch your Apple ID avatar to see what updates are available.

Computer operating systems now handle applications in the same way as phones do. That implies you’ll be able to troubleshoot similarly. You may apply updates to address issues and improve compatibility, as well as delete a program’s cache of local data, which has gotten corrupted.

Because your computer is more sophisticated than your smartphone, there are more potential trouble areas. A computer program, for example, is more likely to have compatibility issues with other software as well as the hardware itself. As a result, you should also ensure that all of your other apps are updated and upgrade the complex software.

On macOS, the procedure is quite similar to the one used on Windows. You’ll use the same updating and cache-clearing principles as before. Check for updates in the setting of the application, which is causing trouble. Hopefully, things will be fine in a jiffy. If not, try clearing the cache of the application.