The use of smart speakers such as Amazon Echo, Google Nest, etc., is becoming extremely common day by day. If you are using one of such devices, you will be aware of using commands to play some music. But one hidden feature in these smart speakers is that they can stream audio from literally any other device as well. It means that you can even play audio podcasts or other audio playlists conveniently by giving a command to your smart speaker.

In this article, we will tell you about this hidden feature and how you can use it to become one of the pros of using smart speakers. We will share the features of some of the most used smart speakers one by one for your convenience.

The Spotify Connect club has Google Nest smart speakers as full subscription members. If your Nest speaker is connected to the same Wi-Fi network as your Spotify app, it will appear when you tap the devices button on either platform. In this way, you can easily play anything from your Spotify application without any hurdles. 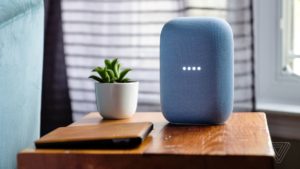 It means that if there is any podcast going on in Spotify, it will also be played by Google Nest. Thus, not just simple music, but also podcasts can be played with these smart speakers.

Another alternative to playing different audios with the help of your Google Nest is to use their audio-only Chromecast feature. For this, irrespective of which operating system you are using on your device, you just have to enable the cast feature on it by tapping its icon. The same requirement of both the device and Google Nest must be connected on the same device. Since most of the android devices come up with this casting feature, you are well to proceed with it.

Keep in my mind that if you have an Apple device, Chromecasting will not work. We will tell you its alternative in this article as well. Just keep reading!

Similar to their Google counterparts, Amazon Echo also comes up with the Spotify subscription. The speakers support the feature of Spotify connect and when the devices are connected on the same Wi-Fi, you can literally play any type of audio whether it’s music or podcast.

For doing this, open the Spotify app and press the devices button, which looks like a speaker. You can find it easily on the main screen regardless if you are using a desktop or a phone.   In the list that follows, your Amazon Echo speaker should appear. After that, select it to begin streaming audio to it, and then continue to access playback from all of your devices using the Spotify software. 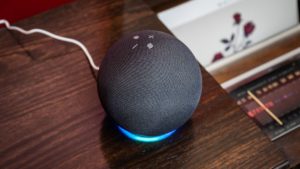 Just as the feature of Chromecast was working for the Google Nest, all of Amazon’s applications including Amazon Music work pretty efficiently when coupled with Amazon Echo smart speakers. Almost every Amazon application comes up with a casting feature through which you can connect it to your Amazon Echo without any problem.

Also, you can use the Bluetooth feature by calling in Alexa to pair it for you. You can connect any device which you want and start playing any type of audio you want. Thus, these smart speakers are not just limited to music only.

In terms of connectivity, the Apple HomePod is more restrictive than Amazon’s and Google’s speakers. Apple’s AirPlay technology is the fastest way to download music to a HomePod. This is simple to do from any company-made smartphone, but it excludes Android and Windows-based devices. 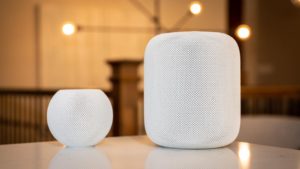 This is the thing we wanted to tell you about Apple that Apple devices are specific in nature and only can run with the help of Apple’s software. Thus, if you have an Apple device for playing any type of audio, then Homepod would be the ideal choice.

May 25, 2021 admin Tech Comments Off on Bluetooth glasses – Razer’s finest

In this pandemic era, you have probably seen your coworkers with the help of video chats. Also, your subordinates and team members are used to seeing you with a handsfree chord or with small wireless […]

The Future of Tablets

August 25, 2019 admin Tech Comments Off on The Future of Tablets

What is the future of tablets? Are they going to skyrocket or to die? Let’s have a look. With the introduction of the first tablet “Linus Write Top” in 1987, these handheld devices that combine […]

May 18, 2021 admin Tech Comments Off on Amazon latest tabs – A wonder for kids & adults

It’s quick to get swept up in the hype around a new high-end tablet, such as Apple’s newly updated iPad Pro range. However, for the vast majority of individuals, such machines are impractical. Recently,  Amazon […]